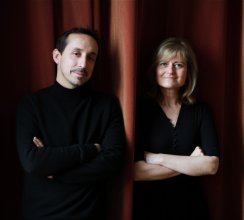 Anne-Lise Gastaldi studied piano in Nice, France, before continuing her studies at the Conservatoire National de Paris, and has won international prizes at the Viotti-Valesia Competition in Varallo and the ARD Competition in Munich. Gastaldi conceives and performs in programs that combine music and other art forms, founding the biennial Journées Musicales Marcel Proust with Pierre Ivanoff in 2012. She is artistic director of ClassicalVal in Val d’Isère and a professor of pedagogy at the Conservatoire de Paris.

David Saudubray has performed at renowned festivals including Auvers sur Oise, Roque d’Anthéron, Nohant Chopin Festival, Festival of Saint-Dénis, Pianofolies, and Nancyphonies. He won the Concurs Maria Canals in Barcelona in 2004 and the Fondation Charles Oulmont Competition in 2009. From 2008 to 2010, he recorded music for France 2’s acclaimed series Au siècle du Maupassant (In the age of Maupassant). He was the opera coach for Leoš Janáček’s The Cunning Little Vixen at Opéra Bordeaux and Opéra Bastille, and currently teaches piano at the Conservatoire à Rayonnement Régional de Paris.

Camille Devernantes is the founder of theatre company La Musaraigne, having previously worked in theatre education and for the French National Ministry of Education. Since 2010, he has worked with the theater company Le Bruit du Monde, appearing in multiple stage readings of Marcel Proust’s À la recherche du temps perdu (In Search of Lost Time) and other classic literary works. He has performed dramatic readings of Proust at the Journées Musicales Marcel Proust in Cabourg, the vacation destination of Marcel Proust.